A carnivorous fish native to the Indo-Pacific and the Red Sea that is now an invasive species in the Atlantic. 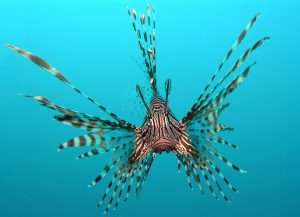 In lab studies, lionfish die when water temperatures reach 50 degrees Fahrenheit. Using water temperature as the limiting factor of it’s potential non-native range, lionfish could theoretically thrive as far north as Rhode Island, United States and as far south as Buenos Aires, Argentina. Lionfish have been visually sighted down to depths as great as 1000 feet.

Another interesting fact is that lionfish have no known predators outside of its native habitat. Predators known to hunt lionfish in their native habitat include cornetfish, grouper, large eels, bobbit worms, frog fish, other scorpionfish and sharks.

Lionfish can eat prey just over 1/2 its own body size as long as it can get its mouth around the prey. They are known to eat just about every marine creature in its range, by some estimates that includes over 70 different fish, invertebrates and mollusks. A single small lionfish may reduce the number of juvenile native fish on any given reef by approximately 79% in just 5 weeks. One lionfish was recently found to have over 60 prey in its stomach.

The venom is a protein-based combination of a neuromuscular toxin and a neurotransmitter called acetylcholine. The venom can be rendered inert by applying heat or freezing. Recommended first aid for lionfish stings and envenomation include surfacing safely from a dive, removing any broken spines and disinfecting the wound then applying non-scalding hot water for 30 to 90 minutes. Monitor for signs of allergic reaction or shock and react accordingly. Seek medical treatment immediately. There have been no known human fatalities as a result of a lionfish envenomation.

For more information on first aid for lion fish related injuries, join us for a DAN Hazardous Marine Life Course.

Lionfish are causing so much harm that they may actually cause the complete collapse of many fisheries and reefs. A single female can lay up to 2 million eggs, which are then dispersed far and wide by ocean currents. They eat almost everything in the water that they can get their mouths around. In fact, they regularly eat fish that are 1/3 their size and their stomachs can expand up to 30 times its normal volume. The fish, lobster, crab and shrimp that lionfish voraciously and indiscriminately consume all play vital roles in the ecosystem. Some creatures keep the reef healthy by clearing algae and other particulate that would otherwise smother and kill the coral while others keep other fish clean of debris, parasites and disease. Other fish use the reef structure as protection until they become large enough to survive in the open ocean and are consequently usually the most commercially important species of fish.

When populations of these native fish are decimated, reefs, which are important for ocean health, global health and human health, die. Fish die due to the spread of disease and loss of habitat. Fisherman, families and communities who rely upon harvesting native fish, go broke and go hungry. Tourist-related businesses that rely upon reefs and biodiversity as a draw, suffer enormously. Populations of people that rely heavily upon a seafood diet suffer due to lower yields, higher prices and greater pressure on other food supplies. 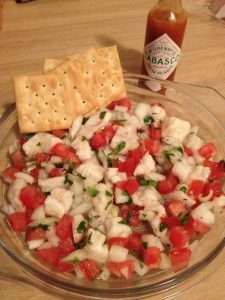 It is true that lionfish are here to stay and we’ll never get rid of them all, huge populations of lionfish are well outside of our reach. The lionfish problem is just like trash, it will continue to accumulate and cause problems, but it is still important that we do something.

Scientific studies show that where lionfish culls are concentrated and maintained, native fish species will return and rebound in a relatively short amount of time. We make a difference.